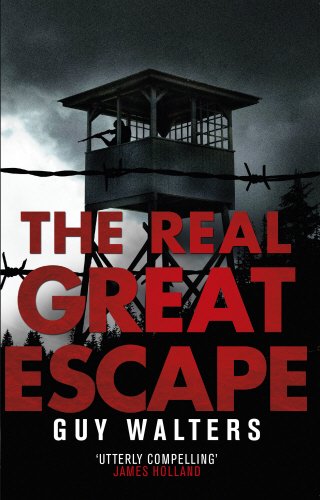 Author: Guy Walters
Paperback
Publication Date: 27/04/2014
Pre-order your copy now and we will supply your order as soon as stock is available

In early 1942 the Germans opened a top-security prisoner-of-war camp in occupied Poland for captured Allied airmen. Called Stalag Luft III, the camp soon came to contain some of the most inventive escapers ever known. Led by Squadron Leader Roger Bushell, code-named 'Big X', who masterminded an attempt to smuggle hundreds of POWs down a tunnel built right under the noses of their guards. Involving multiple tunnels, hundreds of forged documents, as well as specially made German uniforms and civilian clothing, the escape would come to be immortalised in the famous film The Great Escape. In this book Guy Walters takes a fresh look at this remarkable event and asks the question, what was the true story, not the movie version He also examines what the escape really achieved, and the nature of the man who led it. The Real Great Escape is the first account to draw on a newly-released cache of documents from Roger Bushell's family, including letters from Bushell, that reveals much about this remarkable man, his life and experiences during the war, and the planning of the escape attempt that was to make him famous.

In Search Of ...
Biblical Epic and ...
O Sing Unto ...
Dynasty: The Rise ...
Theban Desert Road ...
Brabantia illustrata sive ...
The Great Tamasha: ...
Die Handarbeiten der ...
Restoration London: Everyday ...
Buckingham Palace: The ...
Le Village Du ...
Anglomania: A European ...
La etno-enculturación africana ...
Romanticism and Colonial ...
Stafford County (Then ...
We use cookies to ensure that we give you the best experience on pricepirates.co.uk. Privacy Policy